We aim to preserve the character that has made living in the West 80s so desirable and distinguishes our neighborhood from the rest of New York City.  Working together we can make a difference!  The list below shows many of our accomplishments.

Historic Gilbert Browstones - No longer at risk of demolition

Thank you neighbors, due to our advocacy the lovely gilbert brownstones have been included in the historic district and are no longer at risk of demolition.  They will be protected and renovated to their full glory.

On Wednesday, May 12, 2010, the New York City Council approved the Landmark status of the West-Park Presbyterian Church, by a vote of 47 to-2. The vote brought a 20-year effort by local preservationists to a happy end.

Thank you to everyone in the community who worked so long and hard to preserve the 116-year-old Romanesque Revival church. We believe that our neighborhood will be the better for it.

From HDC and Landmark West!:

The West Park Presbyterian Church is under a big demolition threat. The owners are claiming "hardship" to get the landmarked building demolished, although a non-profit has been using it as theater space and wants to buy it and the costs of renovation are much less than what was announced publicly (according to a preservation architect involved with the building). Many of the preservation organizations are lining up behind LandmarkWest! to find a way to save this beautiful landmark. There are a lot of hard questions to ask about the proper use of the "hardship" exemption and these groups are asking them.  Read coverage of the issue in Gothamist here.  Sign the one-click letter on HDC's website here. 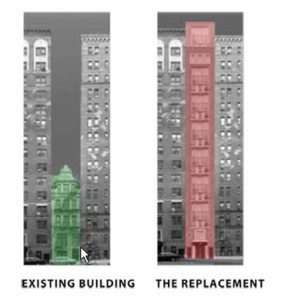